In a pathetic attempt to collar Donald Trump with a nickname the Democrats had a high level meeting about the Republican frontrunner this past weekend. This meeting was to discuss the ways of attacking Trump, by using methods that seem to be working for Trump against them. The brainchild of the Democratic party used focus groups and all the data that they could put together to somehow come up with something that would surely damage Trump. This nickname had to be something that would resonate and it had to fit on a baseball cap. The leaders of the Democratic party knew this was not going to be easy. For hours they met and traded ideas. There was even a point late Saturday night that a couple of the DNC higher ups had to be separated after disagreeing on “Trump” Trump.

“Things got very heated as the hours passed and there were no solutions offered”. Said one of the party insiders. The consensus at first was “Dump” Trump but that didn’t really have the juice that they wanted. Debbie Wasserman Schultz summoned all the party leaders and they worked all weekend in hopes that they could make a big splash for the Monday morning news cycle. One of the party regulars came up with “McDonald” Trump which was a thought that came to him as he scarfed down his third cheeseburger of the night. That was quickly shot down because that would surely upset the vegans in the party. Also, any liberal Irish people in the party could take it as a swipe at their heritage. So it went on day and night with no end in sight. There was almost a break through late Saturday night into Sunday morning, as the head of the DNC in eastern states that don’t end with Y suggested “Dirty” Donald. As they weighed the pros and cons they quickly realized that dirty can be good or bad. That idea was scrapped after 5 rounds of intense secret balloting. We received a secret inside list of the names that were considered as these brave Americans endured “72 hours of hell”, as they put it. We have listed the names below in no particular order for all to see.

“Ronald” Donald- Too much like Reagan and makes no sense.

“Asshole” Donald- It was said so much during meetings, it lost it’s luster.

“Racist” Donald- We are using this over and over on campaign trail so we will save it.

“Crazy” Donald- Might insult those that are actually crazy and hurt their feelings.

“Ugly” Donald- They looked around the room and thought better.

“Dump” Trump- It rhymes but doesn’t have enough character assassination.

“McDonald” Trump- Vegans and Irish are going to be pissed.

“Dirty” Donald- Could mean he’s got skills on the basketball court.

The fight continued all weekend and into Sunday night as the DNC celebrated all the mother’s in attendance with cupcakes and soda in conference room B. Then came the big breakthrough that they all had waited for. As they sat there staring at their laptops one voice was heard singing, “that girl is dangerous.” “Never trust a big butt and a smile.” Of course it was the cleaning service guy listening to Bell, Biv, Devoe on his iPod. “Yes, that is our word!” “Dangerous” Donald was born in that moment and the Presidential race will never be the same. The DNC members exchange congratulatory hugs and papers were thrown into the air. People who had been fighting tooth and nail were once again joined in their feeling of accomplishment. “We have done what no one thought was possible 2 days ago.” said one of the attendees. And so the Democrats came up with possibly the single dumbest nickname in history. They don’t understand the process of nicknaming someone. It has to be spontaneous and the person who is the originator of nicknaming, can’t themselves be nicknamed. Donald Trump has broken every rule of politics because he is not a politician. You can’t beat him at his game when you are part of the very problem he is fighting. The public has awoken and we think that “Dangerous” Donald will only help him succeed. He is dangerous to the establishment on both sides. He is dangerous to special interests. He is dangerous to people who break the law and enter the country illegally. Trump is dangerous to those that want to keep giving our country away. He is dangerous to those in power because we are taking it back. In a world full of Icemen, we will take Maverick. 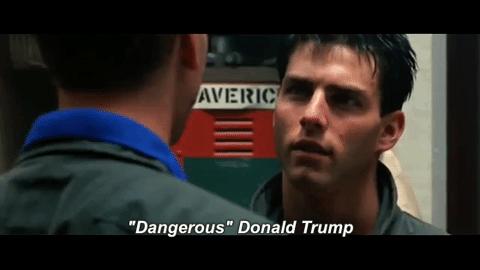